Happy Valentine day to you! 😀

I thought this special day would be perfect for the fresh re-beginning of “Racaire’s Embroidery & Needlework”.

Yes, like some of you might have already noticed, my blog – Racaire’s Embroidery & Needlework – was down for some time. After nearly 9 years of blogging with ca. 2.300 postings, it was time for a fresh beginning. A new beginning with a “virgin” blog and the possibility to protect my photos/ work/ research from further misuse.

Well, already about 4-5 years ago I started to run into my work/photos at other blogs and websites without references and/or links back to me at a rather regular basis and even worse cases of misuse…

The misuse of my knowledge, my works, my handouts and my pictures by others without my permission did hurt me deeply. Based on my experience in the past I decided to divide my blog into several sections.

I used my “time-out” to build up a new empty “Racaire’s Embroidery & Needlework” blog with a membership system behind it. That means that you will still be able to see some of my content – just not all the project related photos, close-up-photos, links, tutorials, free PDFs,… if you are not a member of my blog.

…like the 3 PDFs I recently finished – 2 PDFs with basic embroidery technique overviews for medieval embroidery which focus mainly on the stitches accompanied by some embroidered examples from my personal embroidery portfolio. I started with technique tutorials for Klosterstich and Refilsaum. I also revisited and restyled the PDF with my first German Brick Stitch pattern. All 3 PDFs are in American “letter” format – meant to be printed and collected in a ring binder if someone wishes to do so.

Yes, a new year, a new blog, a fresh beginning – therefore let me introduce myself to you first, before I post something about my embroidery:

Well, I am just an ordinary girl who was born in the late 70’s in Warschau/ Poland. I moved to Vienna/ Austria in the age of 5 and spent most of my life in this beautiful city. During my school time and the one year which I spent at an evening art-school for kids, embroidery & needlework was really the last thing on my mind. I think you could say that I really disliked sewing and embroidery.

I rather spent my time with reading books about the medieval times, like the “Nibelungensage”, “Artussage”, … – about Parzival, Lanzelot and other great knights and their adventures. When I got older I also read Tolkiens “Lord of the Ring” trilogy & Marion Zimmer Bradleys “Darkover Zyklus”. I also used to play MERS (MERP – Middle Earth Role Playing) and many other roleplaying games as well as some live roleplaying games for several years. And well, I was also painting at my 40K Warhammer Chaos Army and was playing Diablo online – all this hobbies didn’t really leave much time for another time-consuming hobby.

Well, this changed completely when I rediscovered my love concerning the medieval times during the visit of my very first medieval market. I was about 21 years old when this happened…

Actually it all started after a visit of a medieval market in Kaltenberg, Germany. I enjoyed the colors, the beautiful dresses, the tournament, the awesome atmosphere… and all this lovely colorful dresses of the ladies there inspired me so much that I decided to do something similar – that happened about 2000 / 2001.

Well, internet was already available during this time but good information (like tutorials, helpful blogs or websites) was really rare back then, therefore I started with buying some issues of a medieval reenactment magazine and hunting down every little piece of information I could find. I bought some linen fabric and because I had no sewing machine, I sewed my very first dress by hand according to a pattern which I found in a magazine called “Karfunkel” – I have to admit that the pattern didn’t work out for me, but with some adjustments it was quite nice and wearable.

As soon as the dress was finished, I thought it could need some nice extra decoration on it. I organized an embroidery frame, got me some threads and needles, took up my courage and finally made my very first embroidery stitches in the year 2001 and well, I still love this dress and even wear it from time to time, even though it is already more than 10years old and not very “period” (accurate)…

Well, that’s how everything started and one of the side effects of this embroidery project was that I enjoyed working at the embroidery so much, that I also started to embroider more and more things…

And the more I embroidered with my “medieval-inspired” patterns, the more people told me that I should start with period embroidery – well, what shall I say, one day I gave up my resistance against the medieval techniques and started my research of medieval embroidery techniques and also started my blog – Racaire’s Embroidery & Needlework.

Based on the fact that many people tell me that my embroidery is outstanding and should be displayed in a museum, I might have done a really good job in the past years since 2001 concerning learning and practicing medieval techniques…

I don’t think that my life is interesting, but some people tend to say that my embroidery is…

At this point I would like to point out Jane Stockton and her websites “In Prayse of the Needle”, “The Needles Excellency” and “Historical Needlework Resources” and thank her heartily for kindly answering all my questions, encouraging me and helping me with my very first handout about Refilsaum while I was still a newbie to medieval embroidery…

Thank you very much, Jane Stockton! 😀 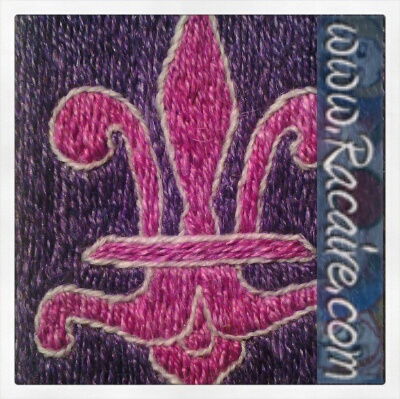 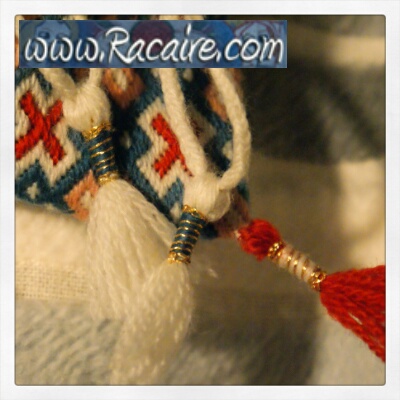 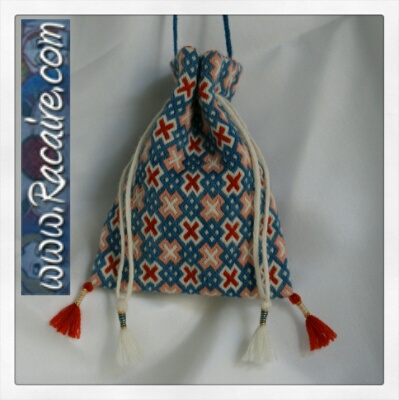 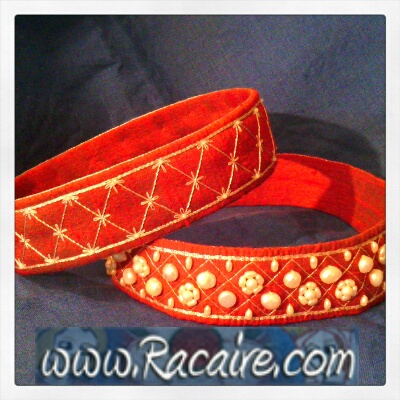 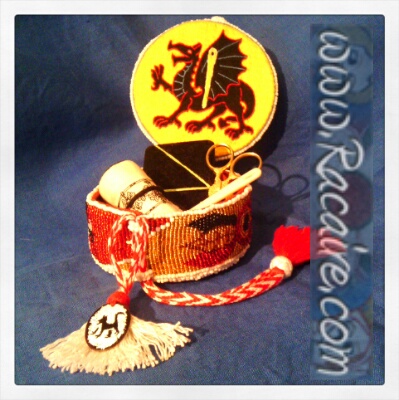 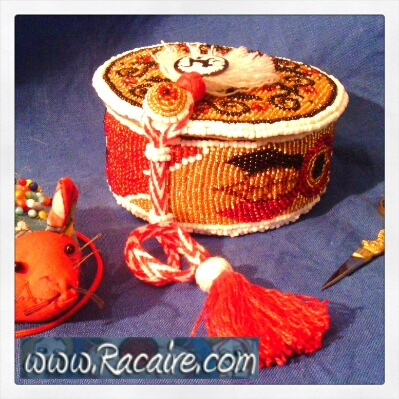 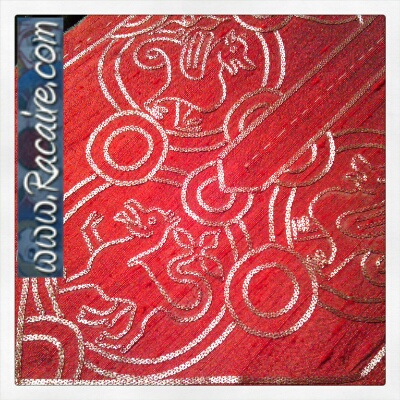 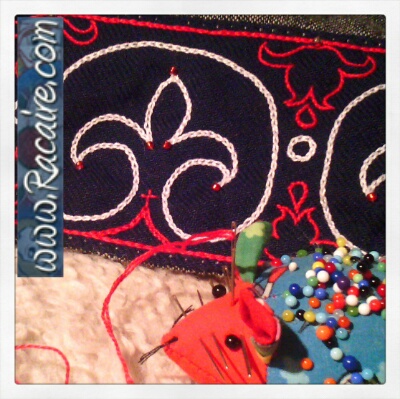 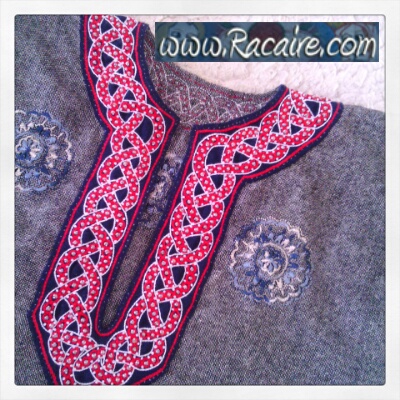 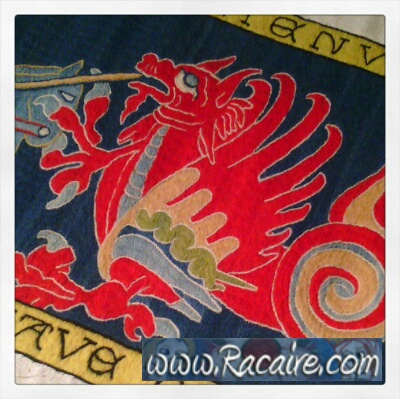 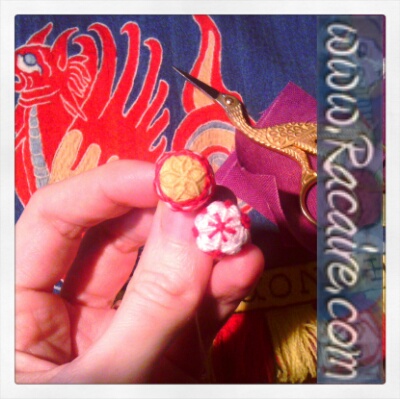 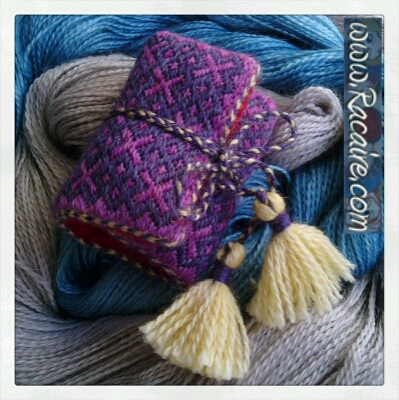 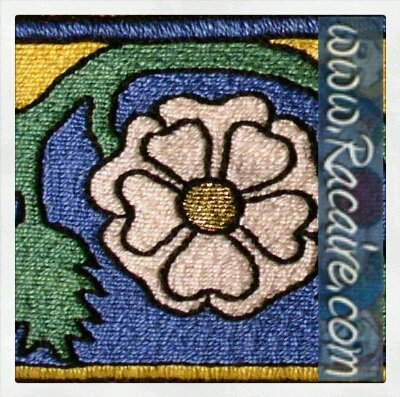 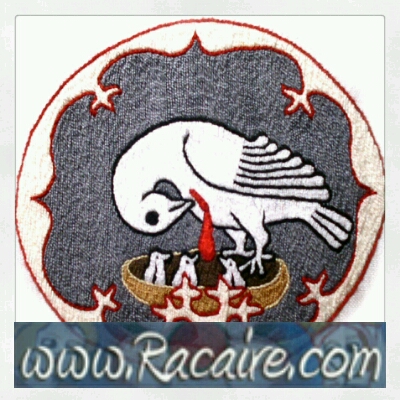 My favorite time frame and “field of expertise” is embroidery from the 11th to the 14th century. I especially fell in love with the period embroidery techniques for medieval wallhangings from this time frame…

How my blog started

Short summery: I started my “Racaire’s Embroidery & Needlework” blog with my very first blog posting at the 5th April 2005. About 2.300 postings and nearly 9 years later I decided to take my “old” blog down because of the misuse of my work and pictures by other blogs. I started a membership page to protect my future photos and works.

Where you can find my works and photos

From time to time I get requests for permission of usage when someone wants to use my photos or handouts. I get requests of usage for my museum photos as well as for photos of my projects – following you will find a list of my favorite picture usages till now:

In the mundane world – when I am not working at my embroidery projects, the calligraphy of a new scroll or blogging… – I am an office manager / personal assistant with completed apprenticeship as office clerk and a project management diploma.

Short summery of my SCA biography

On the 28th of July 2004 I became a member of the SCA and shortly after I joined I also took over the office of the Minister of Arts & Science as well as the Webminister of my shire for several years. I retired from this two offices in order to become the guild head of the Dragon’s Needle Embroidery Guild of the SCA Kingdom of Drachenwald (September 2007 – December 2012).

SCA-Awards I received till now:

Ok, I consider this enough information about my person… 😉

…and last but not least – many thanks to the nice guys from Austrogate who sponsor Racaire’s Embroidery & Needlework since 2005.

Working at an embroidered 14th century pouch for the 9th blog-birthday raffle… :D

…and I am back again…

Works, pictures, texts & patterns displayed here are
NOT to be copied or used in
any way, shape or form
without my explicit permission.
© Racaire – All rights reserved.

We use cookies on our website to give you the most relevant experience by remembering your preferences and repeat visits. By clicking “Accept All”, you consent to the use of ALL the cookies. However, you may visit "Cookie Settings" to provide a controlled consent.
Cookie SettingsAccept All
Manage consent

This website uses cookies to improve your experience while you navigate through the website. Out of these, the cookies that are categorized as necessary are stored on your browser as they are essential for the working of basic functionalities of the website. We also use third-party cookies that help us analyze and understand how you use this website. These cookies will be stored in your browser only with your consent. You also have the option to opt-out of these cookies. But opting out of some of these cookies may affect your browsing experience.
Necessary Always Enabled
Necessary cookies are absolutely essential for the website to function properly. These cookies ensure basic functionalities and security features of the website, anonymously.
Functional
Functional cookies help to perform certain functionalities like sharing the content of the website on social media platforms, collect feedbacks, and other third-party features.
Performance
Performance cookies are used to understand and analyze the key performance indexes of the website which helps in delivering a better user experience for the visitors.
Analytics
Analytical cookies are used to understand how visitors interact with the website. These cookies help provide information on metrics the number of visitors, bounce rate, traffic source, etc.
Advertisement
Advertisement cookies are used to provide visitors with relevant ads and marketing campaigns. These cookies track visitors across websites and collect information to provide customized ads.
Others
Other uncategorized cookies are those that are being analyzed and have not been classified into a category as yet.
SAVE & ACCEPT
Loading Comments...